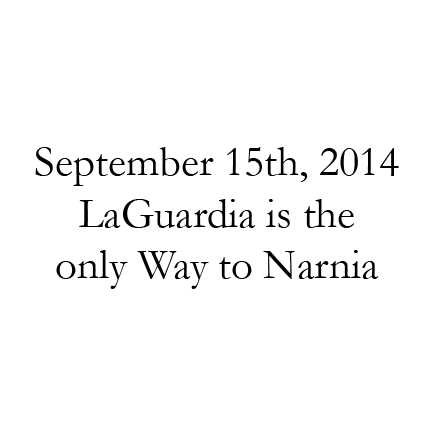 There’s nothing quite like being peer pressured into a road trip across the Eastern seaboard at two in the morning. I don’t generally respond well to peer pressure. Or rather, I guess I should say I don’t know what an appropriate reaction to peer pressure would be. In my case, if I acquiesced to my friends’ constant nagging, they would feel a lot better about me, and I would pride myself in being ‘spontaneous’ and ‘adventurous’. And then I would also find myself in New York City, without a place to sleep, or anything to eat, and I would probably be asking myself how the fuck I got there.

I like New York City. I really do. I lived there for three years before I decided that I should return to living in the real world, where my parents and my siblings and my extended family all resided. On holidays they would all speak about New York City like it was a fantasyland, like I walked through a wardrobe to get there, or happened to stumble into it through a mysterious train platform.

“How do you get there?” my sister’s boyfriend would ask me.

At this point in the conversation, I would have to try very, very hard to not say something like:

“I buy a plane ticket, and then drive to the airport, and then get on a freaking plane.”

But instead, I would just smile and say:

“I fly from ATL to JFK. Much better than LaGuardia.”

You could say that after living in the fictional world of New York City for three years, I gave in to peer pressure and returned to the sidelines, where it was safe and comfortable, and much more affordable. I thought that I had given up the impulsive adventurism of the city, and that although its reach was far and wide, it wouldn’t reach Atlanta.

I was proven to be quite wrong by a bunch of rambunctious old friends trying to convince me to join them in an overnight drive to New York. I wasn’t sure when the persuasion shifted from a friendly invitation to intense peer pressure, but I suddenly found myself knee-deep in all kinds of ridiculous reasons and opportunity-cost analyses.

“Why would you not want to go to New York for the weekend? Is it money? We’ll pay for part of your trip. Besides, you used to live there, so you know all of the cheap places, right? We’ll even drive the whole way, so you won’t have to drive. You can sleep the whole way if you want.”

In this way, my good friend Richard Cooper unintentionally introduced the best tactic in peer pressure: talking more than anyone else. Richard Cooper employed his southern drawl, his sarcastic wit, and his cheerfully goofy smile to shower everyone with an endless stream of words. Most of the things he said were not even very intelligent, but it didn’t matter, because as long as he kept talking, there was no chance to counter anything he said. And yes, even though I did used to live in New York, I don’t know the cheap places, because there are none.

So finally, I caved. I gave in, and was greeted with a rapturous cry of excitement from Richard Cooper, Clint, Charlie, and Quinn. They hugged me and hoisted me up into the air, like I’d just scored a game-winning touchdown in the final seconds of a playoff game. I joined in with them at first, trying to pretend to share their excitement at returning to the fantasy realm. But I couldn’t do it. I snapped.

“Okay. Stop it! Seriously. What the fuck? Okay, I’ll go with you. Just stop yelling.”

Richard unwrapped his arm from around my shoulders and let out a sarcastic chuckle. The group’s enthusiasm dissipated, and they watched me slowly drain the excitement from the room.

“Let me grab my stuff. How long are we gonna be gone, again?”

“We’ll be back on Sunday.” Richard said.

“Okay. Great,” I said, and stormed off to gather a sad arrangement of weekend luggage.

I opened my dresser, looking for clothes that might give me the appearance of fitting in to the fictional world of New York. But nothing in my attire offered me a hint of impulsive or adventurous appearance. My mind scraped through my wardrobe. The only clothing that might fit the wild, adventurous act of taking a road trip at two a.m. was the Indiana Jones costume I’d worn last Halloween, but I hadn’t even seen it since then.

I stuffed some pants and some shirts into a backpack, along with my toothbrush and toothpaste. I reached into the closet to grab a coat, and my eyes caught on my old map of New York City, plastered to the back of the closet wall, behind my suits and sweaters. It almost beckoned me, like some mystical world calling to me from the back of the wardrobe.

Richard stepped into the room, scattering my thoughts. He saw me staring in to the closet, like I’d just seen Narnia, and his wild demeanor changed.

“Ready to go?” he asked, trying to seal off the last two hours of persuasion and peer pressure with an enthusiastic tone of voice.

“Um. Yeah. Just… do you mind if I think about it for thirty minutes?”

He smiled, like a magician revealing a magic trick for the first time.

“Damn it. Yes. Yeah, of course,” he said, with raw authenticity.

“You can do whatever you want.”