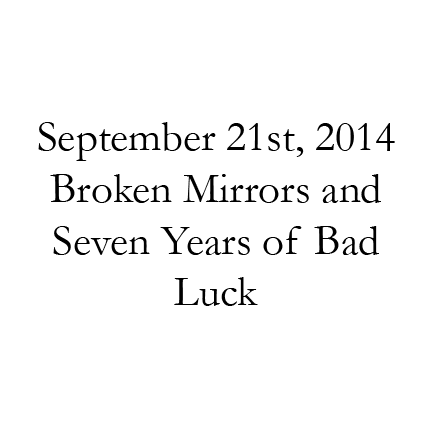 I try so very hard to keep alive and constant the image of who I want to be. Do you know how hard it is to keep your reflection alive after you walk away from a mirror? Nigh impossible, I tell you, but I wouldn’t know, because as soon as I step away from the mirror, I can’t see my reflection anymore. I’m told that as soon as I step away, my reflection is no longer in the mirror. But I have a sneaking suspicion that my “reflection” as they call it, is still there, enjoying himself without me.

But I do make mistakes. I do bite my nails, and I don’t always know what to say next. I forgot that I scheduled dinner with Amanda, because I worked late at the office, but I still messed up the report so badly that I had to stay even later to make sure it was right.

Amanda wasn’t too happy about that. I looked up from my desk at ten minutes to ten, with the terrible feeling that I’d missed something very important. I check my phone and realized what I’d done. When I called her, I tried to tell her that she shouldn’t worry about me. I’m not really like this. After all, my reflection is always on time, never forgets anything, and doesn’t bite his nails. “I am my reflection,” I try to tell her. Who else would my reflection be? But I’m not sure she believes me.

So I go home, and find my reflection wistfully enjoying himself on the other side of the mirror. He looks up at me, suspiciously, as if he knows that I missed something. And that just makes me want to be more like my reflection—because after all, he’s perfect.

I find out the next morning that the report I finished the evening prior is still not perfect. I walk into the office, and take in the expressions of my coworkers—the exact expression that my reflection gave me the night before. I tell them that they shouldn’t worry about me, because I’m not really like this. I tell them, “You should meet my reflection.” But I’m not sure they believe me, either.

The next morning, I try to jump in front of the mirror suddenly and without warning, to see if my reflection is with me or if he’s off on his own.

Finally, my reflection appears in front of the mirror, reluctant and elusive. He’s who I want to be—but if I were him, I wouldn’t be anything. I wouldn’t have any meetings to miss, dinners to forget, nails to bite, or reports to fuck up. So I leave the mirror, and walk away. I’m the only one who sees my reflection, after all, from my own perspective. But everyone sees me, and I don’t disappear when they aren’t looking. I try so hard to keep alive and constant the image of who I want to be. I’m just afraid that it’s a little bit harder to find that person than by just looking at him in the mirror.