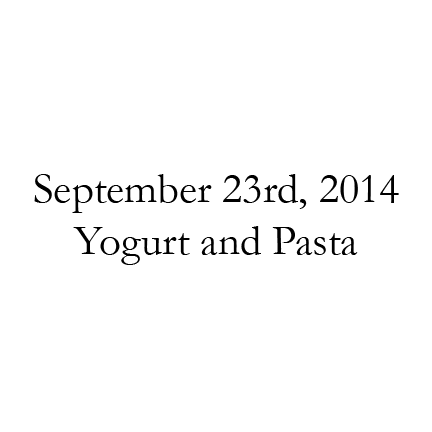 My son Kyle isn’t afraid of wasting time. He doesn’t see time as something to spend—maybe that’s why he always asks me to spend time for him. Time doesn’t have as much value to him; he isn’t losing it. It’s almost as though he’s gaining it—what does he have to lose? Nothing. Kids have nothing to lose. They aren’t afraid to waste time or to lose time. Often, they aren’t even the least bit aware of time.

I found Kyle sitting in the pantry today. He’d opened a box of dry pasta and was dipping each piece into a small cup of pink yogurt, which he used as a kind of cement to glue the penne noodles together. He hardly noticed me when I opened the door; he was so entranced by his yogurt-pasta structure. Even though I knew I was going to have to clean it all up, I asked him:

“What are you building, there, kiddo?”

Sometimes I ask these kinds of questions so that I can gather some meager entertainment from the situation, enjoying a small laugh before having to clean up his mess.

Kyle didn’t hesitate. He didn’t think, consider, or try to present me with an excuse for why he was sitting in the pantry pouring globs of yogurt onto the floor.

His only answer was:

He said it with as much confidence as if I’d asked his name, or his age. There was not a hint of fear or concern. He stared, uncertainty in the eyes as he scooped another large spoon of yogurt and let it plop onto the floor.

He had no fear of wasting time trying to figure out what he was making—it was pure exploration.

Part of me wanted to scold him, and part of me wanted to make a plaque with his name on it. Instead, he ended up in his room, and I ended up wiping the yogurt off the floor. Part of me wondered how children could do that—admit complete uncertainty, remain unabashedly confident, and still end up getting sent to their rooms.

If nearly slipping in yogurt wasn’t enough, I nearly slipped into the trap of thinking that he knew what he’d said. I sometimes interpret Kyle’s remarks as being insightful, when really they’re childish gibberish.

I suppose that when you’re young, you’ve already accepted that life is uncertain and unknown, and so uncertainty is required to maintain the status quo. It’s only at some point when you’re older when you start to think that maybe the future isn’t as uncertain as you used to think. And from then on, uncertainty is something to be afraid of. In reality, maybe we just need to explore. Maybe we need to not be afraid to mix yogurt and pasta and see what happens.

But that didn’t last very long. I cleaned up the yogurt, the pasta, and the rest of the pantry. Kyle started first grade a week later, and I wanted him to be ready: disciplined, obedient, sharp, focused. That’s what school is for, right?

He got it really fast. One week later, he’d never mix yogurt and pasta again. He’d never even think of something like that. He’s not afraid to waste time, because he’s too busy spending it on homework and class activities to have any time to waste.

When I look back, I try to pinpoint that moment—the moment when he started to grow more afraid of the future, afraid of exploring, of wasting time.