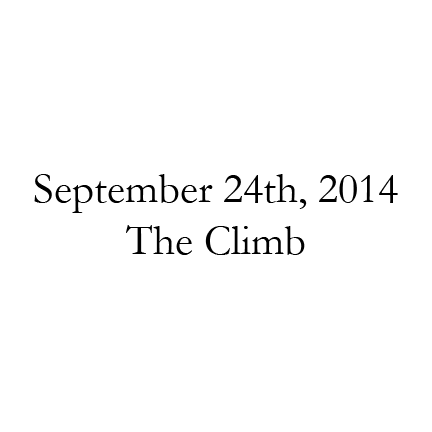 By the time we reached Camp 4, our trust had grown as frayed and as torn as the ropes that held us together. That wasn’t supposed to happen, but neither Elena nor I saw any reason to voice concern: we hadn’t climbed this mountain to face rejection. The mountain, with its violent incitement, had called us both.

Every climber would tell you this—that they’d been “called.” That the mountains had “beckoned” them. But we were different, somehow. I’m still not sure how we knew, because we never talked about it. But you could tell by looking at her that climbing had impressed on her an irrevocable rage. I’d seen this rage firsthand.

The night accelerated toward rigid darkness, closing in around us sharply and without wavering, like molten glass not yet cool to the touch. The team for this climb was small: myself, Irving, Sherman, and Elena—my cryptic, driven rival. We’d both climbed with Irving before—he was a determined, vigorous mountain-climber archetype, but not the type who would question you. Neither of us had climbed with Sherman before, but we had heard the stories about him.

But Sherman remained impervious to any expectation. He rose to fame after several high-profile climbs, then disappeared from the world stage. Only recently had he resumed climbing, after a sudden, nine-year absence. And yet, despite his long awaited return, I knew by looking at him that although he’d climbed hundreds of peaks, the mountains had never really called him.

We reached the last camp just after the molten darkness seeped over the jagged earth. We stopped, but the magnetic pull of the summit scraped my mind with its venomous taunting. Always above me. Always ahead of me. I didn’t sleep.

I awoke in some dark void between midnight and sunrise. My chest hung heavily in my frame, and my head throbbed, but that always happened when I climbed. I wasn’t awake because of a headache or lack of oxygen. The mountain had woken me.

The voice of a violent storm yelled outside of the tent, and both Sherman and Elena were gone.

I grabbed Sherman’s fraying ropes and pushed myself into the ferocious weather outside. The violent wind vaulted at me, shaking my body in an unforgiving attack. I shined my light through the onslaught of thick precipitation, but could hardly see two meters in front of me. I yelled until my voice scraped and sputtered, and my screams dissipated into the thick, empty void.

The trust began to fray.

I stepped away from the tent, keeping it within sight.

Elena and I never spoke, unless the intricate logistics of planning a summit necessitated it—and yet, we understood each other. We understood the risks involved in a climb like this, without oxygen. We understood the trust that we drew from each other. And we understood the muted hatred for each other that festered in our minds. I last saw Elena at Everest two years prior. The last words she’d spoken to me were pathetic attempts to convince me that her team had nothing to do with an incident of sabotage on my team’s camp, on the eve of the summit. Government authorities intruded on the intricacies of our trip, and nearly destroyed everyone’s work toward the summit. The rushed descent from Camp 3 resulted in two of my team members getting injured. Our trip was delayed a month, costing my team a total of a hundred and twenty grand. We reached the summit nevertheless.

I told Elena that I held no blame against her—that I didn’t believe in holding grudges, or in forming enemies. I’d told worse lies before.

My mind raced with these thoughts as I scanned the cloud of snow pummeling the invisible terrain. I heard something, and took a step into the storm. Another noise, another step.

The snow collapsed around my footing, and I slipped into a rough patch of rubble. My ice pick scraped against the hidden rocks, and I suddenly felt the weight of my body fall to my arms. I hoisted myself away from the chasm, and lay on my back. I looked over the edge of the rocky cliff next to me, and saw a figure.

The storm thickened, obscuring the view, but I yelled and waved until the figure saw me. They were confined to the edge of a broken outcropping of rock, hanging off the edge of the cliff. I threw Sherman’s rope toward them. They strapped the rope to themselves, and waved to me.

I pulled, hoisting the trapped figure on the other end toward me, half a foot at a time. As the figure climbed and pulled closer, I realized who it was.

The thought registered in the back of my mind, behind the noise of the storm, and the darkness of fatigue. I felt Sherman’s rope give in my hands, compromised.

Elena drew closer, until she was nearly a hand’s-distance away from me. Snow started to cascade into the crevice around us, and crashed down under the weight. Elena yelled something at me—I couldn’t understand her, but we both knew what she was saying.

I knelt over the side and lowered my gloved hand to her. I felt the weight of her glove in mine, and clasped.

My arm tensed and tightened as I lifted her away from the collapsing outcropping. Below her, massive drifts faded into the darkness.

I hesitated—and realized she was just waiting for me to pull her onto the ledge beside me.

The rope frayed and tore, but our trust for each other ripped apart under the weight of our temerity.

I could just let her go.

It was almost as though I could feel her heart beating through the gloves and gear. Goggles masked her eyes, and yet, I knew what she was telling me. I could feel the tremble of fear pulse through her body as she realized that I could actually just let her go.

And lifted her up.