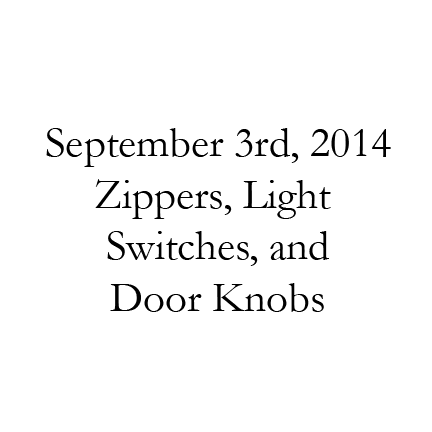 My mother tells us all sorts of things to make us behave, or to encourage us. She shapes my siblings and me with her words like those sticks gardeners use to guide the weak trunks of growing plants. She says things to me like: “Oh, sweetie, there’s no need to be afraid of the dark, you can always stand up and flip the light switch back on. God gave us hands and eyes––if one doesn’t work, the other can still help you out.”

And in the middle of South Carolina winters, when my brothers and sisters and I run around without realizing how close to freezing it actually is, she says things like, “Zip up your coat before you catch a cold.” And of course, we probably won’t, because it’s South Carolina.

And when confused and trapped feelings of disorientation coil around me, in the twisted knots of high school, she knocks on the door of my room, and calmly says, “It’s okay. Don’t feel trapped. Just open the door.”

I took my mother’s words for granted, because I heard them every day. When the only thing I heard every day was the voice of my prison cell guard, and the defeated mumbling of other prisoners, I started to forget what she said to me about being in the dark, about being cold, and about being trapped.

A mother’s words don’t protect. They just guide, and teach, that’s what they’re for. They’re meant to prepare, but nothing prepared me for this. I always thought my words would do the same, but I was wrong.

I didn’t know I was wrong, but I could feel it in the thick, hot air of the Low Country. I could smell the bent atmosphere. My friends were the wrong people, and I spent time in the wrong places, and that was all it took.

The police twisted my words and pulled a confession from my flesh until it was as hollow and empty as the words I was saying. They told me I could go home, once I confessed. And that was as true as my confession.

The week before my release, I heard my mother’s words again. Her voice shared a glimpse of the years that I’d missed, and I knew that I’d be born into a different world. I’d be a human time capsule, stuck thirty-three years in the past, trying to understand what Google was, what a smartphone was, and what the internet was.

One week later, I was released. My family took me home, back to our house in the Low Country.

I opened the door of the spare room that had once been my own. I walked to the closet, flipped the light switch, and grabbed my old coat.

I pulled it around my shoulders, and zipped the zipper.