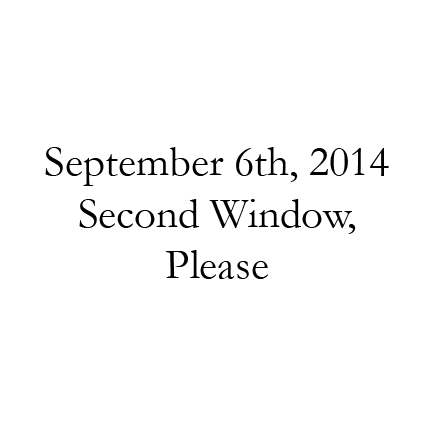 If I were to die today, I’d have to check my calendar first, to make sure it didn’t conflict with anything else. But if I was free, I’m sure I’d be hurried along through the existential drive-thru window, and be greeted by either a demon from hell or an angel from heaven. “Meet Your Maker,” a sign would say, and once I arrived at the first window, I’d be surprised, because I’d expected God to be a little bit taller.

“Oh, I’m not God,” the angel would say. “God’s way too busy to be greeting people at the door. If you stick around for a couple of years, you might run into him.”

“Really?” I’d say, confused. “I thought that there was no time in heaven?”

The angel would laugh.

“No time in heaven? That’s a good one. Who told you that?”

I would shrug, and the angel would continue to check me in, like a front desk clerk in a heavenly hotel.

“Is this your first time here?”

“Yes.” I would answer, confused and still recovering from my recent passing. “Wait. Do people come here a second time?”

“Just wanted to make sure you were doing the whole reincarnation thing,” the angel would say, sliding me a massive stack of paperwork.

“Reincarnation?” I’d ask. I’d learned about reincarnation in a religious studies class that I took in college, but never gave it much thought.

“Nah. Just fuckin’ with you. You’re either in or you’re out, and there’s no re-entry allowed.”

“Oh,” I’d say, awkwardly diverting my attention to the stack of paperwork. “What is all of this?”

“Well, we have to get some information about you, seeing as how you’ll be with us for the foreseeable future, right?”

I’d nod, and he’d step forward, seeing that I was still lost. He’d slide the paper over.

“See this here?” He’d point to one of the lines on the page, which would look almost as confusing as a tax form. “Just list down everything that you’re leaving behind that made a difference.”

“Everything I’m leaving behind that made a difference?” I’d ask, overwhelmed.

“Yeah,” he’d say. “Y’know. Anything that was important. Let me know if you have any questions, I gotta review these other requests for entry.” He’d point to a stack of papers, a dozen times larger than the one he’d given me.

I’d turn to the form, and try to think of where to begin.

If everything I’ve ever done caused a rippling schedule conflict in the calendar of existence, then everything I’ve ever done should make it onto this list. The smile I gave my daughter when she showed me a page of correct math problems––that goes pretty high on the list. The time I showed my son how to play “Honest” on the piano. That goes high on the list, too. My mind would begin to flood with all of the small memories, the perfectly accidental creation of moments that I’d left behind. Even the dull list of mundane experiences stuck to the floor of my subconscious might make it somewhere onto the list.

But before I put pen to paper, I would tap the angel on the shoulder, with just one more question:

“How many things do I need to list off? I mean, everything is pretty important, isn’t it? Doesn’t everything make a difference, in some way or another?”

Another angel would step forward, except he’d look a little bit different than the first one. A little brighter, maybe, a bit taller.