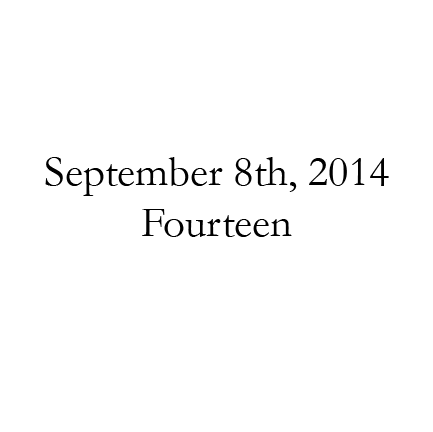 But for all of the lack of suspicion surrounding Lawrence, I make up for it. My father has a great liking for a certain film that takes place in Arabia, and I fill the void of suspicion with my own suspicion that he might have gotten the idea to name my little brother Lawrence from that movie.

Lawrence loves to count, but he never counts numbers quite right. He always skips fourteen, like it doesn’t exist. He just goes straight from thirteen to fifteen. I try really hard to get him to say “fourteen,” and not just pass over it like he can choose which number he wants to come next:

“No, see, you missed fourteen. Say this: thirteen, fourteen, fifteen.”

Every single damn time, he ignores me and pretends like fourteen just doesn’t exist. Like ignoring it just makes it go away. I started to wonder what he’s going to do when I turn fourteen, or when he starts learning the calendar and it’s the fourteenth day of the month. Or if he makes a friend in school whose address is 14 Fox Ridge Circle. My mom says that he’ll figure it out, that it won’t last forever, but I’m not so sure about that, and still try to get Lawrence to count the numbers in order, the way they should go.

My mom isn’t too worried about Lawrence’s mathematical abilities, or my own, for that matter, and my dad is too busy to ask about it.

“He can count the way he wants to, for now. No need to make him face anything he doesn’t want to. They’re just numbers,” she says, but I don’t really know what that means.

I came home from school last week, nervous about a math quiz in Mrs. Diaz’s class the next day. I thought for sure that they would ask me about school at dinner, and that I would have a chance to talk about my quiz, and math, and have another go at convincing Lawrence about the existence of the number fourteen. But they didn’t ask. They just ate in silence. Raw, bitter silence, like a fourth-grade math class waiting for someone to answer the teacher’s question, only to discover that nobody actually knows the answer.

I looked at my mom, then at my dad, then back at mom, then dad. And finally, I asked them:

“Can someone help me do my homework tonight? I need to work on a quiz for Mrs. Diaz’s class tomorrow.”

My dad spoke up and said:

“Yeah. I’ll help you after dinner.”

I wasn’t asking my dad. He’s usually too busy, and not actually that good at math. One time, he told me to do fractions all wrong, and my mom just told him to go put Lawrence in bed while she finished helping me. I thought that they sort of agreed from there on out that she would help me with homework, whenever I needed it. But she didn’t say anything, and so he spoke up.

After dinner, my mom left the table almost immediately, and silently. Dad, Lawrence, and I cleaned up the table, and dad told me to get my homework. He took Lawrence and put him to bed, while I pretended to know where to start.
My teacher gave me a C- on the quiz, but that wasn’t what bothered me. My mom always asks me what grade I got on a quiz when I get home from school, and what bothered me more than getting a C- was that she didn’t even ask me. My mom and my dad both bled silence at the dinner table that night, and the next night, too. The night after that, we didn’t even eat together.

Saturday nights were supposed to be fun, because mom would go out with her friends, and dad would threaten to make something gross like lentil soup, but instead would order pizza. He would move the couch up closer to the TV, and we would watch something really cool, like Star Wars, or Toy Story, or Lawrence of Arabia.

But we didn’t do that this night. We ordered the pizza, and dad moved the couch up closer to the TV, but he didn’t come and sit with us. He just put on Lawrence of Arabia and went into the kitchen, waiting for my mom to come home. After I took off the pepperonis and ate four pieces of pizza, I went into the kitchen. I asked my dad where mom was.
He looked pretty tired, and instead of saying anything, he just gave me a kind of tired hug. Then he said:

“I don’t know. She’ll be back, soon. We just have to see what happens next.”

I heard the garage door open, and my mom park her car inside.

He told me to go back in the living room and watch the rest of the movie with Lawrence.

I went back into the living room, but Lawrence wasn’t watching the movie anymore. He was on the floor, counting checker pieces. I sat down beside him as I heard my mom walk into the kitchen.

Lawrence’s quiet, tender voice counted the checker pieces, and I knew that I would have to correct him again.

My mom yelled something at my dad.

Something thrown across the kitchen shattered.

I counted with Lawrence, ridiculously, but more sincerely than anything I’d ever done: