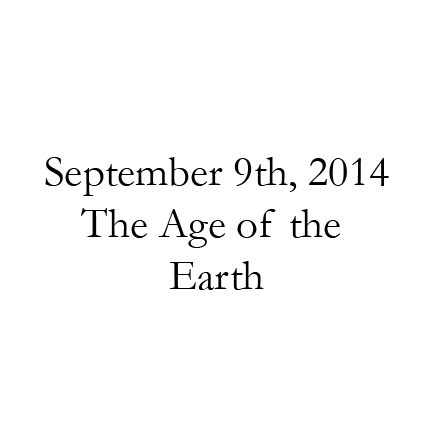 And that’s the part that confused the hell out of me: we marvel around, wondering how old the earth is, as if that could somehow tell us where we are going, or what is going to happen to us.

That’s not the whole truth, though, to be honest. I don’t care about the age of the earth, but Mrs. Henderson wants me and every one else in BIO 424 to care. Or at least, care enough to write a paper about it. Our class talked about the age of the earth for a whole week, and she made us watch several more long videos of old fogeys, enlightening us with their expert insight into the debate.

One of the “mysteries of the universe,” they called it. One of the keys to “unlocking the secrets of the earth.”

That confused me a bit more, because I had a long list of things that I thought were Mysteries of the Universe, and the Age of the Earth wasn’t one of them. I’m still trying to figure out what the hell is going on with my life, and whether or not I should drop out of Edenton, or if it would be worth finishing school so that I could try to go to grad school and become a fucking lawyer. And if I did become a lawyer, I’m still wondering if that would actually get me any closer to being who I want to be, or if I would have better luck if I just sold all my textbooks, along with my bicycle and that wristwatch my mother gave me when I turned fourteen, and travelled to Asia.

Unfortunately, I couldn’t just go online and watch videos of old fogeys debating my mysteries of the universe. But I don’t care, because the age of the earth doesn’t matter to me.

So instead of turning in that paper on the Age of the Earth, threaded with opinions from old atheists and old Christians, I wrote a fantastic paper about whether or not I should drop out of school, or really go for the lawyer thing.

My future, on the other hand, is easily altered. And in my case, a BIO 424 grade from Mrs. Henderson can have a profound impact on the only mystery of the universe that really matters.