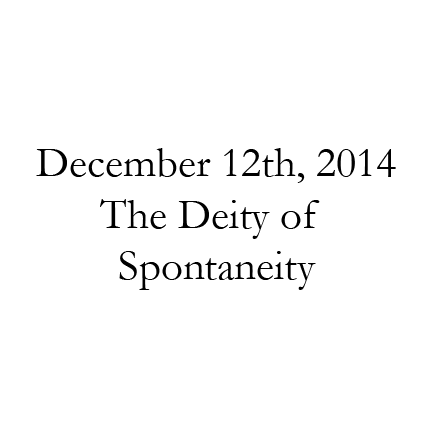 I don’t believe in spontaneity. Far too often it’s used as an excuse for doing things that are overwhelmingly unintelligent, or to justify a lack of planning. People idolize spontaneity, and it makes sense. It’s that tool in your back pocket that you use to find fun in a monotonous existence. Bored? Pull out the spontaneity in your back pocket and go on a road trip. Order pizza. Jump out a window (preferably one on the first floor). Call up someone you haven’t talked to in two years. Or ask a stranger to trade sweaters. Who knows? You might make a great new friend. Or you might get looked at like a freak of nature. Hooray for spontaneity.

It’s a great tool, to be sure. But no one ever told me that it was also a terrifying glutton for control, hellbent on changing the direction of your life.

It snuck into my life quite by accident, I would say. Frederick, this annoying guy who earnestly believes his attractiveness rivals James Franco’s (it doesn’t, by the way), was always asking me to get coffee with him, until finally I did. This was not spontaneity.

I met him on the corner of Hargett and 7th. Frederick. Who goes by

“Frederick,” anyway? Didn’t anyone tell him that he could shorten it to “Fred”? Or maybe even “Freddy”? That’s almost a cute pet name. But no, he carried his full name proudly and pretentiously.

And he dressed with almost as much pretentiousness. We were getting coffee, for God’s sake, not going to a movie premiere. But he didn’t seem to understand that, either. He arrived in a suit coat that looked so expensive I wondered if he was going to return it immediately after our coffee date.

He tried so feebly to kick up a conversation, like his words were a piece of gum, stuck the to the bottom of his expensive leather shoes. We bought coffee and sat outside, at a table beside the street. He droned on and on about the band he was starting, about the songs he was writing. I tried, tirelessly, to pretend that I had some kind of interest.

That’s when I realized I had some leftover spontaneity that I hadn’t used, burning a hole in my pocket. I don’t believe in spontaneity, but it believed in me, and started to burn straight into my skin and my mind, giving me all sorts of suggestions to escape this bitter monotony of the gumshoe conversation.

I worked hard to ignore it, and to pretend like the scalding fire of spontaneous urges didn’t exist. But they whispered in the back of my mind:

“See that cup of coffee? Throw it at his face!”

“See that empty table? Jump up on it and start singing.”

Ridiculous suggestions poured into my mind, until a voice broke through.

The voice was rich, raw, and a little out of breath. It came from a runner, jogging past our table. He slowed as he approached, and looked at me with a healthy dose of earnestness.

I looked up at him, shocked. Frederick stopped droning on about his band, and turned, aggravated by the interruption.

“What?” I said, but I already heard my spontaneity agreeing with him.

Frederick looked at me, confused and incredulous.

I stood, and ran to catch up after the runner.