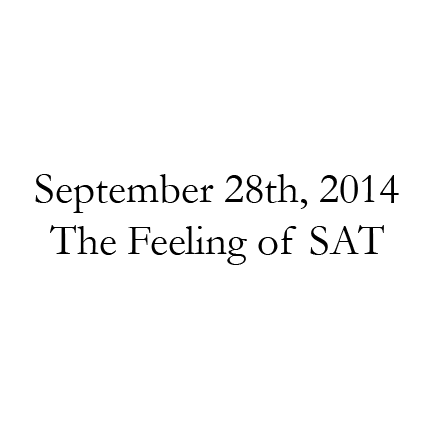 Sometimes I think that my life is fragmented and disjointed. But I’m sure that’s really an over-exaggeration. Maybe if I took a step back and stopped worrying about every damn thing, I’d be able to see the bigger picture.

That’s what I thought about when I walked off the airplane into SAT, the San Antonio Airport. That’s what I think about any time that I fly, actually, except the weather during this flight into SAT clouded the sky and I couldn’t see the ground. Normally, looking down over the vast expanses of land in the US makes me imagine how helpful it would be to look at my life from 20,000 feet. Although, I never can seem to book a flight that’s travelling above my mind, so instead of getting a bird’s-eye view of what the hell is going on, I find myself walking into SAT, wishing I were somewhere else.

I always get a despondent feeling when I walk off the plane and into SAT airport. It’s a great airport, don’t get me wrong. I’m not sure if it’s the fatigue I get after travelling, or if something in San Antonio actually does give me a fragmented hesitation.

There are lots of reasons I dislike flying into SAT, but if I’m honest with myself (which I rarely am), I’d have to say that the main one is having to find a ride back to my apartment. I don’t own a car in San Antonio (that’s the real problem), so I post on Facebook and ask my friends if anyone can pick me up from the airport at nine o’clock tonight. Nobody responds, so I text my roommate. He responds at eight-thirty, with a joke that maybe I should get my own car. And then he says sure, he’ll be there soon.

It’s not the first time I’ve heard that. People can be snobby about owning cars. If someone wants to hit me with a low blow, all they have to do is mention that I don’t own a car, and the whole room gasps or cracks up.

“How do you live?” they ask me. I want to tell them that I live the same way that they do, but I’m not sure that’s true. Instead I say, “I ride my bike pretty much everywhere, and when I can, I get a ride with a friend.”

My environmentally inclined friends congratulate me on my dedication to the earth, but I don’t do it because of that. I do it because my monthly paycheck is about seventy-two dollars and forty-six cents more than my monthly expenses. I’ve got a little money saved up in the bank, but I plan to save that for a rainy day.

It just so happened that it rained on the day I got back into SAT, delaying my flight and putting a damper on my roommate’s mood. When the plane finally landed, he’d been waiting for more than an hour, and when I finally picked up my luggage and got to his car, he spent the entire drive making fun of my lack of transportation.

So the next day I found a used car, and spent all of my savings to buy it. Not because I need a car, but because I don’t like being made fun of.

My roommate called me a loser for not having a car. I took his word for it, but I like to think that now that I have one, I’ve proved him wrong and I’m not a loser anymore. Really, I just bought a car so that nobody could make fun of me. But of course, they don’t know that. And now that I have a car, my roommate has found other things to tease me about.

I’d like to take a step back and stop worrying about every damn thing, but I almost never seem to book a flight that goes high enough to see what’s going on below. And when I do, it’s raining, and I can’t see the ground.